Posted on May 28, 2014 by morobinbarrystories

WELCOME TO MOROBINBARRYSTORIES.COM! Please join me on twitter @morobinbarry. This site is for Bee Gee fans everywhere who would like to share and read stories of fun, joy, love and inspiration for Barry, Robin and Maurice Gibb. (Andy is not forgotten and is included at times.) If you’d like to share a story, please email it to me at morobinbarrystories@gmail.com. Stories will be posted weekly, some from my collected tales and some from the new stories as they come in. Others I will save for my book, which is in progress. This writer will also contribute articles about special events and other happenings that relate to the Gibbs. 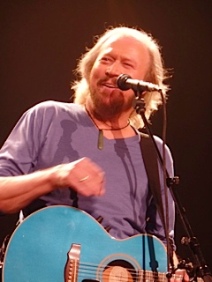 I want to write that I’m speechless, overcome and unable to find the words to describe what happened In the United Center tonight, but I would be lying. In fact, I have so many descriptive adjectives of joy that I would need another article to list them all. The thousands that witnessed Barry’s concert this evening were beyond lucky because Barry blew apart that arena and made it look like a walk in the park. Sometimes I wonder if God just had a moment where he said, “I think I’ll give this guy all the good looks, talent and personality I can muster and let him run loose in the world”.

All of the concerts have been incredible, but tonight something was different. Barry was witty and funny in a different way. I want to say that I think he’s getting into the groove and becoming more comfortable on the stage by himself, and I think I would be right. It’s been an amazing few weeks. Not only have the reviews been outstanding, but the piece on CBS Sunday Morning Show was heartfelt, sensitive and genuine. He is riding a high that he hasn’t experienced in years, and the fans are reaping the rewards.

I keep wondering how his voice can sound so strong and seem to be better and better as the tour goes on. I think adrenalin is cursing through his veins at warp speed. When he held up his water glass and saluted the crowd, I wanted to ask him if it was really water in that glass or some special recipe of “elixer of energy and passion” that only he has the recipe for. His attitude seemed to permeate the stage as well and touch all of his supporting players.

The band is sounding tight and superb. Damn, those musicians are fabulous. The talent on that stage is a thrill to watch. I want to hug every one of them and thank them for supporting Barry the way they do. Barry is out there on his own without his brothers’ support; and in a way, the band is his security blanket, only this is not just an ordinary blanket. This is a cashmere blanket, the best of its kind.

Now i need to mention Stephen Gibb for a moment. He makes me crazy but in a good way. He looks so serious, as though the weight of the world is coming through his fingers when he plays the guitar. When he plays a solo piece, I am in awe, and I love his graspy, throaty sound. He is so much in control and such strong support for his father that I don’t think fans realize how important a contribution he is making to this tour. My only complaint is that he doesn’t smile enough, and I want his persona to loosen up and give me that mega-Gibb smile. It is enchanting, and he is cool and smooth when he flashes that grin.

There were so many wonderful moments in this concert, but I’d like to mention Barry’s rendition of “Morning of My Life”. In fact, I could mention that song every time I write because the lyric still is the most beautiful ever and the song is gentle and lovely. The audience is just transported, so yes, I will keep talking about that song over and over again.

Barry was so comfortable and cozy on that stool and related so nicely to the fans that it felt like an unplugged, intimate performance. Although he was playing to a huge arena, he somehow makes the fans feel that he is there for each one of them individually. This is a gift that he possesses, and he seems more spiritually connected to each member of the audience. Even though Samantha Gibb was unable to perform tonight and was missed, Barry made up for her absence with electrifying enthusiasm and powerful vocals.

As I watched the show tonight, I kept thinking about what a shame it is that this tour will end soon, and the musicians and singers will part ways and go to other commitments. This show is the type of entertainment that needs a run in Vegas, even if it’s a short run. I know this isn’t a possibility because the vocal demands would be challenging, but it would be so cool to see this show in that venue. There are thousands of fans who want to see Barry perform, and they live through the Internet and You Tube because the show has limited dates. We can only hope that after a hiatus he will continue once again to share his magical gifts with the world. Now that’s the kind of dream fans around the world wish for.

Goodbye Chicago…..you were awesome. Now it’s on to the Left Coast…..

See you in sunny California..

2 Responses to BURNING UP CHICAGO!!