BARRY AND THE MOUNTAINS—BOTH MAJESTIC

Posted on June 2, 2014 by morobinbarrystories 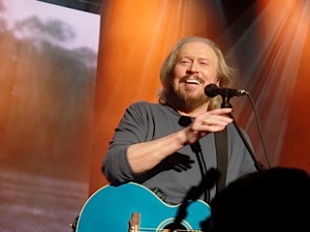 Northern California’s landscape is impressive. The mountains are certainly majestic and crossing the Golden Gate Bridge and seeing the mountains in the distance is thrilling. The Sleep Train Pavilion is an outdoor amphitheater about 45 minutes outside of San Francisco and is nestled into the side of a mini-mountain. A good portion of the seating is covered by a roof overhang and the lawn section in the back is well-groomed and comfortable, just the place to listen to an outdoor concert. On this night, the weather cooperated and it was in the high 60’s and sunny. The venue manages to seem cozy, although it is quite large.

There were long lines to enter the grounds well before show time and long lines at the merchandise booths. As always, fans came long distance to hear Barry sing. Yes, LONG, like from Mexico and Japan. So, how was the show? It was nostalgic, sentimental, and full of remembrances that had a bit of a softer edge tonight. Although Barry has been emotionally jarred after certain poignant moments thus far, tonight he seemed to be more sensitive and easily moved by both the music and the audience.

Getting teary is my specialty; and I’ve been able to keep control for the most part, but when Barry’s exterior stoicism cracks, that’s all I need to pull out the tissues. Especially on “Immortality”, Barry seemed more emotionally fragile, and his tribute to Springsteen was front and center gentle and sensitive. These are two of my favorite moments of this show. The audience isn’t the screaming, wild group at this juncture, and it’s because they are so moved by Barry’s voice and interpretations that they get lost in the melodies. It’s like being hypnotized and lulled into a zen state of being.

Performing again without Samantha, Barry spoke of her with tenderness and asked the audience to wish her well. Helping fill the void, Stephen gave an especially powerful performance of “On Time”. No matter how many times I hear this, I marvel again and again at how this suits his voice, and let’s just say that he continue to play the hell out of that guitar. Steve does always look so focused while on stage; but every once in awhile, I can see him glance at his father and there is a look of pride that is unmistakable.

I think of Robin and how much it meant to him to be creating music with his son RJ, and I know that being on stage together and creating these memories of performance must be like a dream for both father and son.

I keep thinking of the line from the song “America The Beautiful”. “For purple mountain majesties”. So tonight we had two majestic sights, the natural landscape in the perfect environment and our majestic Barry singing to us. I think that the word majestic fits him perfectly because, although he is chilling out on stage and more relaxed, he is becoming larger than life as the tour progresses. I look at him and see the Mr. Spock of popular music. He opens his mouth, and the fans are transported, gone to another sphere. We’re in “the Barry galaxy”.

The audience was having such fun traveling along with him. No one wanted the night to end. I felt a strong heart tug of sadness because this tour will soon end. There are so many thousands of fans whose lives have been touched by the experience of being in the audience for The Mythology Tour and like a passionate love affair, I don’t ever want it to end.