Posted on June 5, 2014 by morobinbarrystories

Welcome to Morobinbarrystories.com! Please join me on twitter @morobinbarry. This website is for fans everywhere who would like to share and read stories of fun, joy, love and inspiration for Barry, Robin and Maurice Gibb. (Andy is not forgotten and is included at times). If you’d like to share a story, please email it to me at morobinbarrystories@gmail.com. Stories will be posted weekly, some from my collected tales and some from the new ones as they come in. Others I will save for my book, which is in progress. At times I will contribute articles about special events and other news relating to the Gibbs. 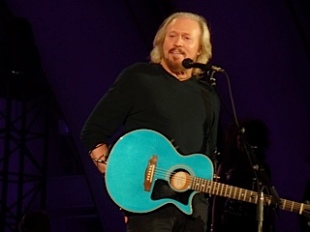 As I walked up the hilly drive leading to the Hollywood Bowl, I felt a churning in my stomach and a wave of anxiety. Tonight was going to be an historic night at the Hollywood Bowl. Our Barry was walking onto one of the most famous stages in the world, and he was walking alone. In his craziest dreams, I don’t think he ever thought that this night might happen. I know he gets nervous, even though he’s been a performer since childhood; and with the nerves I felt, I could only imagine the flips that Barry’s stomach was taking.

I was surprised that the crowd was filing into the stands quite early. There was a buzz and an excitement that made me even more nervous. Passing Rolls Royces, Cadillac Escalades and limos,  I knew there was going to be an interesting mix of fans in the seats tonight. Not to be a name dropper, but Olivia Newton John and Barry Manilow were spotted, which makes it just about as cool an event as it can be. There’s a very different feeling about Hollywood that is exhilarating; after all,  it is the “entertainment capitol of the world”.

Right before Barry came onstage to start his show, I felt my throat constrict and I became short of breath. This would be the last show of the tour, and I was feeling almost physically sick about it. Not to worry because the minute Barry walked out, I was floating away with him, and he smiled and had an energy in his step that set the tone for the next two hours’ of performance.

The show keeps getting better and better, and this group of musicians make the well-oiled machine look like it’s rusty. I also wanted to mention that the lights and sound were perfect, due to the efforts of John and Randy and the supporting crew members. This concert had crystal clear sound and fabulous lighting techniques. All the special touches, including the disco ball that is lowered during the Saturday NIght Fever music, were perfectly timed and executed flawlessly throughout the tour.

Barry was happy and engaging with his audience, and often took water breaks, which he confided would soon be replaced by sake. His sense of humor is always on display, and he again made a massive outdoor arena seem like a cozy, intimate setting. He chatted with the audience and made an exciting remark when he said, “This is the last concert on the tour, the sixth, at least for awhile.” It was the first indication that The Mythology Tour would have another leg in the future, and there are thousands of fans worldwide who are breathing a collective sigh of relief and saying a silent prayer of thanks.

The best news about tonight’s show was that Samantha Gibb was back on stage again after being sidelined by illness. She and Barry do a lovely duet on “How Do You Mend a Broken Heart” that almost brings me to tears because they both close their eyes when they sing this song, and Barry reaches out to Samantha and takes her hand in a gentle gesture of affection. I could almost sense Maurice’s presence and know that if the circumstances were reversed he would be just as loving and sensitive as his brother is with Samantha.

So, tonight certain songs stood out. One of the most beautiful sounds on earth is Barry Gibb singing “With The Sun In My Eyes”. I have not mentioned this piece before. I think I like to pretend it’s my own private song that I share with Barry. I find the way that Barry delivers this music as an almost spiritual experience (this and the Springsteen “I’m On Fire”). Both songs had the crowd riveted, and I pray that when Barry decides to add cities to the tour, he will not delete either one of these from the set list.

As usual, the audience was on its feet and singing along with everything from “Night Fever” to “Words” and loving every second of the show. I have to admit that I did tear up on Robin’s tribute. There is nothing like the sound of Robin Gibb’s voice on “I Started A Joke”, and Barry was applauding right along with the crowd as the song finished and Robin took his humble bow.

Of course the night ended with a standing and screaming crowd shouting its approval, and Barry reaching out to the audience, shaking hands and accepting bouquets of flowers.

Then it was over, and he was gone from the stage, his left arm reaching behind him to give a last wave to the crowd. It had indeed been an historic night in the Hollywood Bowl, and Barry Gibb gave thousands of fans immeasurable joy, and he did it on his terms.