CONCORD IN VISUALS……..SPECTACULAR NIGHT OF MUSIC..

Posted on May 29, 2015 by morobinbarrystories

Welcome to morobinbarrystories.com! Please join me on twitter @morobinbarry.  This site is for Bee Gee fans everywhere who would like to read and share stories of fun, joy, love and inspiration for Barry, Robin and Maurice Gibb. (Andy is not forgotten and is included at times). If you’d like to share a story, please email it to me at morobinbarrystories@gmail.com. Stories will be posted often, some from my collected tales and some from the new ones as they come in. Others I will save for my book, which is in progress (and moving forward). At times, I will post articles relating to Gibb events that I hope fans will enjoy. Thanks for reading!

As we remember the one-year anniversary of the Mythology Tour concert in Concord, California on May 31, 2014,  here is a photo essay of some of my shots of the night. I admit this concert was one of my favorites for many reasons. The venue was spectacular, the crowd energized and pumped from their own enthusiasm and the band fabulous. The downside was missing Samantha and the void left by her absence. However, all the pros on the stage filled that void and gave beautiful performances. Here are some of the best moments, and we hope for many, many more to come.

Hours before the show, the line of fans formed amid the backdrop of the California mountains. I got excited all over again as they shared their enthusiasm at the prospect of actually being in the presence of Barry Gibb.

Sitting with “media man” Ron was going to be fun. A decades-long fan,  it was great sharing his excitement about the upcoming show.

The crowd was HUGE….and charged up long before Barry took the stage. 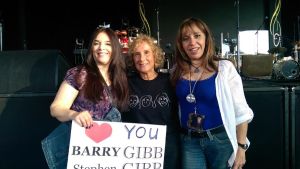 I loved having fans come up and say hello. Here are Lynette and Miky and the awesome sign they made for Barry. 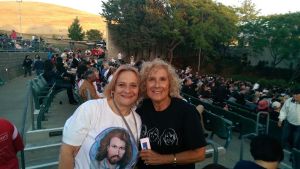 Chrisea had on the coolest shirt, and she waited many years to be in a Barry Gibb audience. I was excited for her, knowing that her dream of being with Barry was about to come true.

There is no way to explain the effect Barry and the band had on this crowd. Magic!

Beth Cohen is a marvel, and her duets with Barry were a highlight of the show. Then her solo pieces vaulted everyone out of their seats! Her voice has no equal.

Steve is my heart’s desire. Not only is he a great musician, he is a damn nice guy. Then he dressed up for Concord and took my heart away with him……

I have posted this photo before, and I still find it moving. Watching Barry give a squeeze of encouragement to his eldest son as he performed was a truly touching moment I won’t ever forget.

There can never be enough said about a crew that makes it all look so easy. The special effects, such as this screen shot from Grease, and the great lighting, made it all flow so seamlessly. The crowed screamed its appreciation. 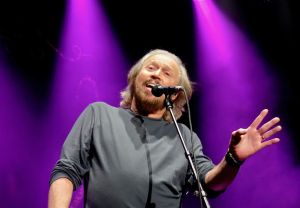 Barry charmed the socks off of the thousands present……of course.

Moved by the crowd here. 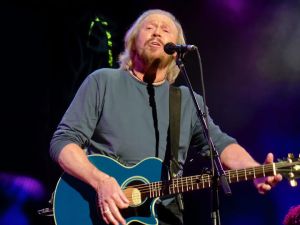 Steve giving it his all…… 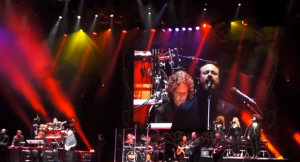 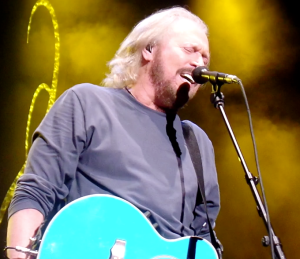 Yes, this says it all….no words needed…..Thanks, Barry, for a concert of a lifetime….

5 Responses to CONCORD IN VISUALS……..SPECTACULAR NIGHT OF MUSIC..