I LOVED THEM MORE THAN THE BEATLES

Posted on August 21, 2015 by morobinbarrystories 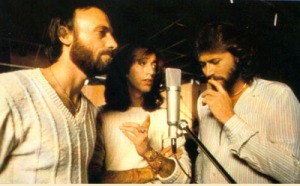 Today’s story is an old one from a fan who adored the Bee Gees when everyone around her liked the Beatles. Oh, well, many of the fans out there identify with this!

I became a Bee Gee fan when I was in 8th grade. My cousin Tommy was a huge fan, and he and my aunt and uncle  came to visit almost every Sunday and he would bring his albums. We played them over and over, and I was in love.

My friends were all Beatle fans, and I listened to them, but I was never crazy for them like the rest of my girlfriends seemed to be. I remember listening to late-night radio shows where fans would call in and talk for hours about their favorite Beatle and DJ after DJ would have contests and give away everything from posters to gift certificates. One show had a poetry contest and I jumped on the bandwagon and wrote a poem about them and won a t-shirt. I gave it to my friend Cathy, who loved George Harrison. I wasn’t excited about it because I loved the Bee Gees.

I wanted everyone to listen to “MY” band instead. It wasn’t until “Main Course” came out that my girlfriends realized how incredible they sounded and how wonderful Barry Gibb was, how sweet Maurice Gibb was and what an amazing voice Robin Gibb had. Of course, I had loved them since 1971, so this wasn’t new for me. I look back and wonder why it took so long for everyone to realize that it was really the Bee Gees who were the best band ever. My friend Marianne became so wrapped up in everything that Barry did and said that it became an obsession and she talked about him day and night. It was as though the light bulb finally went on and never went off.

I remember the arguments with people in high school who didn’t see how perfect they were until “Saturday Night Fever” was released. When most United States fans fell in love with them, I already had five albums and a room full of photos and t-shirts and my Bee Gee lunch box and coffee mug.

Hundreds of memories later I still have my boxes full of Bee Gee music and play them whenever I need to be perked up and happy. After a bad day at work or a problem bothers me, I put on their music and just smile. One of my favorite songs isn’t a popular one. It’s “Happy Ever After” from the “Living Eyes” album. It makes we want to cha-cha no matter how many hundreds of times I have heard it. “Don’t Fall in Love With Me, Baby” is another song I love, and don’t get me started on “Wildflower”. It makes me think of how I crushed on Maurice Gibb and how that crush will never end.

Barry, Robin and Maurice made my years growing up so happy. Anyone who wasn’t a fan was missing out, and I almost felt sorry for them. I was one of the lucky ones and my teenage years were so much fun and so exciting because of their music. I get chills remembering those days, so special in the early years. Thank you. Thank you, forever.

4 Responses to I LOVED THEM MORE THAN THE BEATLES