You Had To Be There!

Posted on February 18, 2017 by morobinbarrystories

Welcome to morobinbarrystories.com! Please join me on twitter @morobinbarry. This site is for Bee Gee fans everywhere who would like to share and read stories of joy, love, hope and inspiration for Barry, Robin and Maurice Gibb. (Andy is not forgotten and is included at times) If you’d like to share a story, please email it to me at morobinbarrystories@gmail.com Stories will be posted often and many will appear in my book, which is slowly being edited. At times, I will write about Gibb events, which I hope the fans will enjoy.

Anyone who is a Bee Gee fans knows about the Recording Industry Tribute to the Bee Gees, a concert that was taped on Tuesday, February 14, which will be broadcast on April 16 on CBS.

Yes, the analogy is fitting; held on Valentine’s Day, it was truly a love fest for the Gibb brothers. This Grammy honor has only been given three times. The Beatles, Frank Sinatra and Stevie Wonder were the previous honorees, so our Gibb boys are in elite company.

Instead of reviewing the concert (since fans have seen almost every performance online already)  I thought it fitting to share some of the “grab you by the throat” moments that viewers will not be able to appreciate when they watch the concert.

In no particular order, here are some special off camera moments…..

John seemed to be on an emotional high, and he was clearly grateful for what the Bee Gees’ music did for his career. He mentions this during his little moments on stage, and his interactions with Barry throughout the night were heartfelt. John was sitting close to Barry, and their obviously congenial relationship was fun to watch. In between performances, there were moments where the crew was setting up for the next act, and the fun they were having sharing this momentous event just made me smile.

2. The nervousness of the performers

We don’t often think that famous celebrities get starstruck, but just about everyone who was performing was fighting the nerves because Barry was watching them. They knew a music legend when they saw one. A particularly fun moment occurred when Philip Sweet from Little Big Town flubbed his opening introduction of “How Deep is Your Love”. The good humored audience laughed and applauded as the director gave instructions to start again. Phil responded with a big smile and commented “I’m so, so nervous” as he looked over at Barry. He was too cute, and everyone in the crowd could relate to him. Having the big man himself watch as he sang one of the most recognizable Bee Gee songs had to be mind-blowing.

Philip Sweet on the right in photo…….

It’s difficult to appreciate the genius of this aspect of the concert without being in the theater. The Microsoft Theater has 7, 100 good seats. The stage is wide and of course there are two side projection screens for up-close viewing of what’s happening on the stage.

On this night, the beautiful and creative graphics were breathtaking. The innovative and inspiring laser, video and special effects had the crowd applauding the efforts of the lighting designer and his staff. I could only imagine what his light plot looked like. It must have been as big as the Bible! (FYI, a light plot is the book of cues for every single lighting effect of the show.) The flow was seamless, and the video clips dispersed throughout meshed beautifully with the colorful and visually inventive lighting.

Although this concert was billed as a tribute to the Bee Gees, when Nick Jonas walked onto the stage and the band began playing the intro to the oh, so familiar “I Just Want to Be Your Everything” there was a shift in the mood of the audience. Although everyone was swaying and singing, it was bittersweet and there was a palpable sadness throughout the crowd. The large photos of Andy that beamed down at the fans were of a young man who never grew old and never lost his zest for life or his gentle, kind spirit.

If the audience was feeling half of what I was experiencing, (and they seemed to be), the grief of Andy’s loss and the unfairness of it hurt and stabbed the heart all over again.

I thought that Nick honored Andy’s memory with a heartfelt performance. One could see that he was extremely happy to be singing that particular song, and he was fabulous. Andy might have been a Bee Gee one day, and he was, as Barry said, “the little light” of the family.

Witnessing thousands of people sharing in my grief made me feel better, and this helped me to remember the genius of Andy Gibb and just how special he was.

5. The power of Celine Dion-“Immortality”

When the concert is broadcast, the audience at home will witness a superstar performing like a superstar. Her voice is a miracle of an instrument, and she is certainly one of a kind, much like Whitney Houston or Andrea Bocelli. These artists are just a cut above the rest.

What the audience won’t feel is the surge of energy that went through the crowd when she walked onto the stage. It was almost as though they held their collective breaths and didn’t let it go until she was finished with the last note.We all knew we were about to witness greatness, and I’m not exaggerating.

I didn’t think she was going to make it through her opening remarks. Still suffering the loss of her husband Rene, it was clear that she seemed frail, thinner than before. Even so, she was regal, and the crowd, clearly moved and teary,  was silent as she sang.

I shook a bit and got goose bumps and people around me closed their eyes and blinked, some openly weeping. This song conjures up all sorts of memories of lost loved ones. We all can relate to the lyrics, and that’s another reason why the Bee Gees are the greatest songwriters who ever lived.

Celine during her performance–she is a queenly talent

6. Barry’s behavior during the concert

It’s still hard to believe how humble Barry Gibb can be these days. As he attentively watched each performance, sometimes singing along, he seemed impressed and honored but was certainly still giving off the feeling that he was amazed at the whole event. Once in awhile, he had that look on his face which read, “Gee, for real? What did I do to deserve this?” and then there was the “I can’t believe Stevie Wonder and John Legend just sang my song” look.

I was gratified because I don’t want to ever experience what I call “the Doris Day Syndrome”. I love and adore Doris Day and think she was incredibly underrated and certainly deserved an Oscar for several of her performances, especially “Midnight Lace”. She was a star for several decades and needs to be given an honorary Oscar, but have they done it? No, and she’s in her 90’s. I expect the Oscar will come after she has passed.

Thank God the Recording Academy has done its job in a timely fashion. Barry deserved every joyous moment of this tribute, and his modest acceptance of the honor was great to watch. 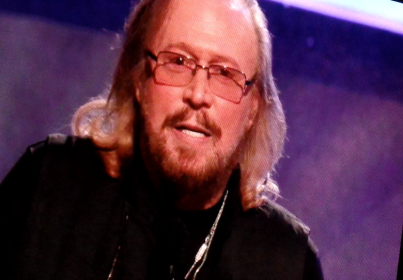 7. Joy and pride of family members

The Gibb family is a large one, and many of them were there to support this tribute.The best part about this was seeing how happy and excited they were as they responded to the performances throughout the night.

Adam Gibb and his wife Elaine were in the audience. Knowing that Maurice would have adored every moment of this night, it was great to see Adam enjoying himself.

Michael and Jenna were having a wonderful time, too, and I was happy to see them.

Linda and Ali seemed to be totally enraptured by the show, and I don’t think Ashley Gibb stopped smiling. He was so proud of his father, and it was obvious that his expressions reflected that love and pride.

I don’t know how much of the ending of the concert will be in the broadcast, but after the stars came on for the finale, the show ended in dramatic fashion with confetti streaming from the rafters.

What may not be seen is the way the stars surrounded Barry as the show ended. It was the young performers who had that “starstruck” attitude and who showed great respect. Nick Jonas and Demi Lovato were the first to hug Barry, and then it seemed that everyone on the stage surrounded him with a collective hug. He was inundated with love, and so many brilliant performers themselves were showing their admiration for him and the songwriting talents of the three brothers.

No one left the stage for awhile. I think they all knew that they were in the presence of someone who truly is a musical legend. It was emotional and fun and exciting to witness this act of musical love for Barry.

Of course we all know that being part of the audience at a live event is exhilarating. The taping of a musical special is a different story because of all the stops and starts. There was more time for observation at this event.  There are so many other moments that I could mention, but you get the idea.

Bee Gee fans at a concert behave as ONE. The energy, passion and enthusiasm they have for the brothers is an adrenaline rush. I know the fans will love this concert, and I hope you all enjoy the little inside tidbits I’ve shared here.

3 Responses to You Had To Be There!